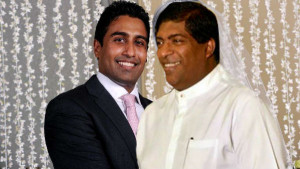 Money bags Ravi Karunanayake today admitted that even someone as wealthy and corrupt as himself needs financial assistance by way of a sugar daddy from time to time, although that person is not always someone who is older.

Speaking from his mansion paid for by the tax payer, Mr Karunanayake said, “While it generally accepted that a person who is referred to as a daddy is someone older, this is not always the case. My sugar daddy is several year’s my junior but has amassed so much wealth that it is only natural that I gravitate towards him faster than space debris enters a black hole. I knew if was love at first sight when he reached across the table and offered to pay my rent in one of the most expensive penthouses in Sri Lanka.”

“He is like the father I never had. Saying that I actually had a father but he wasn’t as wealthy as the Arjun Aloysius. So I put myself up for adoption and it turned out that I had better luck than the boy from Cambodia who was adopted by Angelina Jolie. I heard that that Arjun was planning on adopting Rishad Bathiudeen as well, but I put a stop to that as I knew that I didn’t want a deforester for a brother. Plus I would have to split the riches which, for those who know me, is something I would never do,” he added.

2017-07-28
Share
Previous ‘Who Came First – Chicken Or The Egg?’ Replaced By ‘Who’s To Blame First The Briber Or The Bribee?': Harsha
Next Estate of Late Andrew Sachs To Sue Ravi For Plagiarism Following Statement Made At Today’s Hearing