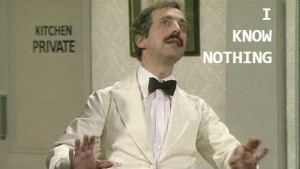 The family of Faulty Tower actor Andrew Sachs announced that they will be launching legal proceedings against Foreign Affairs Minister Ravi Karunanayake following a statement made by the UNP MP at a hearing held earlier today.

A spokesperson representing Mr Sachs, who rose to fame portraying Manuel said, “For Mr Ravi Karunanayake so say that he knows nothing is blatant plagiarisation and also an outright lie. He knew exactly that Mr Faulty placed money on Dragonfly at horse race and also that Arjun Aloysuis paid his rent for the Penthouse Apartment that he was staying in as a means of currying favour. There are other phrases that Mr Karunanayake could have used to indicate his ignorance on the matter.”

“As such we are suing the bastard for the sum Rs 3.5 billion for copyright infringement, and we know that he can afford this as it represents just 6% of his wealth,” the spokesperson added.

Mr Karunanayake said, “It is true that I am a fan of Faulty Towers, and that I took inspiration from John Cleese’s character to run the country’s finances. But to say that I tried to make one of the signature phrases of the show as my own is a blatant lie. So is everything else that comes out of my mouth.”

2017-08-02
Share
Previous ‘A Sugar Daddy Isn’t Someone Who Is Necessarily Older’ Says Ravi About His Relationship With Arjun
Next Why Is Only My Father To Blame, When The Biggest Crook Is My Mother’s Husband: Onella