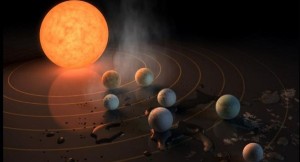 Following the discovery of a new planet system, NASA today announced that the timeline to transport humans to there will coincide with the completion of the investigations into the bond scam and Hirunika’s abduction case.

A spokesperson said, “When we discovered the seven new planets orbiting around a star, we immediately started planning a timeline to convey people from Earth to the new system. Rather than use the standard of earth years (orbit around the sun) we needed a better measure to try and simplify the calculation of long periods of time. We decided that the most suitable options are using a measure of a Sri Lankan bond scandal which equates to 5 earth years, whereas a Hirunika abducts investigation is equal to 50 earth years.”

“So in about 100 Hirunika Abductions, we should be approaching the new planetary system. Of course, MP Chathura Senaratne said that he has already been to the new system when he was 6 years old, just after facing tear gas during a protest he attended in Sri Lanka,” he added.

2017-02-23
Share
Previous Cannot Ban Big Matches Because Boss Is Going: Minister
Next I Fought For Independence In 1948 As A Spermatozoa: Trump University Graduate Chathura