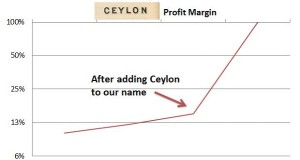 The Government of Sri Lanka is considering a proposal to reverting to the name Ceylon after a study confirmed that companies using the colonial name were able to charge higher margins.

A government spokesperson said, “We had a Cabinet brainstorming session last week which unfortunately had to be postponed after the actual number of brains confirmed attending was less than one. So we got in some marketing con-sultants to tell us stuff by using a lot of buzzwords that have no significant impact and charge a lot of money.”

“The only thing that came out of the programme was that companies are using that use the name Ceylon are able to charge a premium by creating a false perception of value through association. Brands like Spa Sri Lanka, Sri Lanka Arrack adopted this strategy and look how much they are able to charge for the same cost as before.”

“We are trying to extrapolate this and see if using the even older name ‘Tambapanni’ could lead to even higher profit margins,” added the spokesperson.