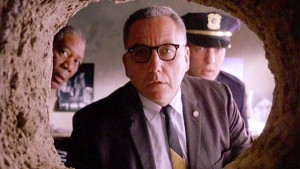 Former Central Bank Governor, Arjuna Mahendran, and his son in law and former director of Perpetual Treasuries, Arjun Aloysius, were reported to have been watching The Shawshank Redemption ahead of this afternoon’s statement regarding the report pertaining to the Bond Scandal.

A source close to both men said, “In preparation for the worst and probably the right decision to prosecute the two family members for fraud, they decided to brainstorm ways to deal with the situation. One idea was to study how to get out of jail and, to that end, they decided to watch the how Andy Dufresne made his way out of the Shawshank penitentiary. They even got a Blue Ray copy of the film to study the intimate details of his escape in high definition and have ordered a rock hammer.”

“They also downloaded Papillon and have binged their way through three seasons of Prison Break. They want to make sure that they do their homework and they cover their tracks properly, unlike when they perpetrated the Bond Scandal and left their footprints all over the place,” the source added.