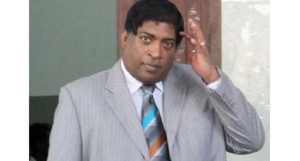 Former Minister Of Finance, Ravi Karunanayake, has asked his secretary to immediately download all five seasons of popular TV show Prison Break, following a statement by President Maithirpala Sirisena with regards to the Bond Scandal.

Mr Karunanayake said, “Although so many of my friends have told me what a good series it is, I never had the chance to watch it especially as Arjun Aloysius’ penthouse did not have a DVD player and I also didn’t think it would be of use to me. However, after the President’s statement a short while ago, I think I might have found some time to binge watch the entire series this evening. I have also placed a call to Wentworth Miller to find out if he can recommend the tattoo artist he used to the blueprint of the prison inked onto him. I have told him that I posess the requisite space for this, however large the canvas required is.”

An Executive Producer for the series said, “We have received a request for all the research work into Prison Break by Mr. Karunanayake as part of his purchase request for the series. We are not sure why he needs it, but he has said that it is for his former landlord Arjun Aloysius.”