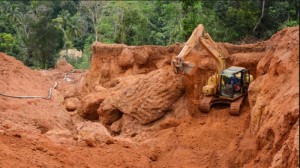 The government today justified the on-going construction of Port City saying that the country needed more land to house the population as the existing terrain that makes up Sri Lanka is dwindling as a result of the destruction of natural resources across the country for the purpose of building Port City.

A government spokesman said, “There is a considerable amount of rock and soil excavation going on for Port City, most of it done without any proper environmental assessment impact. As a result there is significant damage done  which is increasing the chances of people living in this area being displaced due to landslides and other natural events being accelerated. That is why we are building Port City so we can house them there as soon as it is built.”

“All they have to do is raise Rs 100,000,000 for a studio apartment, convert it into Yuan and then they will own the leasehold of the property for 99 minutes from the Chinese. They may even come into contact with some of the rocks and soil that were taken from their original homes and see how it is being used.  So it’s a win-win for them and Yaun-Yaun for China,” he added.

Meanwhile, some ministers have defended their involvement in the illegal excavation saying that they need to raise money to buy property on Port City eventually, which they cannot do with just the bribes they currently receive.

2017-03-14
Share
Previous Child Who Claims To Be Older Than Father Walks In On Live Interview
Next Govt To Allocate One Day A Week For Protests; Protestors Ask All Days To Be Renamed Monday