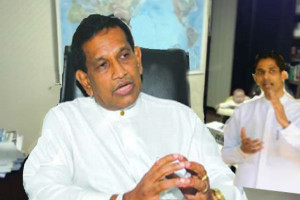 MP Chathura Senaratne caused chaos on live TV when he walked in during a live interview to explain why he was older than his dad and how he single handily chased the Portuguese from Sri Lanka during the seventeenth century.

The child walked in while his father, MP Rajitha Senaratne,  was spouting more lies about the Yahapaalanya government on a live internet interview. The younger Senaratne walked in and said, “I have only told you my achievements during the nineteenth century and I would like to take this opportunity to expand on those and give a more historic account of my contribution to the development of this country over the last few centuries.”

It was then revealed that Chathura was actually a four year old when his brother who is just two years younger to him strolled into the room to expose Rajitha’s son for the fraud that he is.