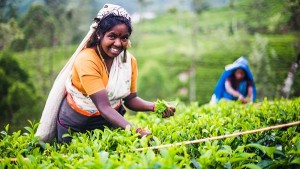 A number of Sri Lankan Tea Pluckers said they will be celebrate 150 Years of Ceylon Tea by continuing to pick tea leaves for the price of a cup of tea at a kade and also ensure that their face displays no sign of struggle or hardship when a camera is thrust in their face.

We interviewed one tea plucker who said, “My dream is to one day own a one bed room house for my family. I was within reach when, during a trip to Colombo, I accidentally ordered a cup of iced tea at Coffee Bean and ended up spending three month’s wages. That’s for like 5 grams of tea power which is what I earn for picking 15 kilograms. Can’t I have a fancy name like Barista to bump up my earnings?”

A number of other women, who make up almost the entirety of the tea plucking workforce said, “The second most important thing we learn after the lesson about picking two leaves and a bud, is to always smile for the camera. No matter how heavy the burden of tea in your basket or how many hours you have been plucking to meet your target, one must never forget to smile when your picture is being taken. They said that otherwise, we won’t be featured on ad advertisement for Ceylon Tea aired in a country that we will never be able to afford to go to.”

“We hear that there are a series of events, parties and posh dinners are happening to celebrate the 150 Years of Ceylon Tea in Colombo, where apparently not one tea tree has grown.”

2017-08-10
Share
Previous Mahinda Proposes Paying Ravi Karunanayake’s Rent In Order To Prolong The Distraction
Next I Had To Discede: Ravi. I Also Had To Discede But I Might Get A Chance To Be Perpetua: Marapana