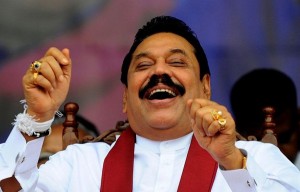 Former President Mahinda Rajapakse has offered to pay any rent requirements of embattled Foreign Minister Ravi Karunanayake in a bid to prolong the latter’s predicament and thus the distraction it is causing from his own misdemeanors.

Speaking to the media, Mr Rajapakse said, “If he needs his rent to be paid in Dollars or Dirhams even that is something we can easily organized as we have foreign currency stored in many denominations, although the majority is in Swiss francs and under the bed. The standard approach that we are used to is when someone pays our rent, but on this occasion we are willing to return the favor as we have more to gain out of it.”

Ravi Karunanayake’s daughter said, “It is very kind of the former President to offer to pay for our rent as the millions in profit generated from our logistics business is not enough for us to afford a luxury penthouse with a private pool. I will have to discuss this with my parents over dinner, but I will make sure that even though my father hears everything, he does not listen. The is made easier due to the clear canal in the area of the brain between his ears.”

2017-08-10
Share
Previous We Can Prevent India From Scoring 600 Runs In Third Test By Not Staging It: Sri Lanka Cricket
Next Sri Lankan Tea Pluckers Celebrate 150 Years Of Working For A Pittance And Smiling For The Camera