The Movie ‘IT’, About A Clown Trying To Scare People, Is Not Based On Mervyn Silva Says Stephen King 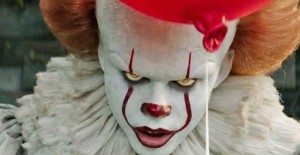 Speaking during the premiere of the movie ‘IT’, the acclaimed author of the novel behind the film said, “I know everyone thinks this was based on Mahinda Rajapakse or Premadasa, but people should remember that the book outdates both of them. Saying that, however, if I were to write a sequel to IT, then there is no doubt I will be influenced by the antics of some Sri Lankan political characters.”

“It will be a cross party effort – for the fear mongering aspect of the character I would look no further than the Rajapakse family, while for the clown aspect I can look to Ranil De Silva or Ravi Karunanayake. That is why I have decided to retreat to Sri Lanka to write this novel as there is so much material I can use by observing the antics of the country’s leaders.”

In a related story, Mervyn Silva is set to sue Stephen King and Warner Brothers Pictures for use of a character based on his likeness.