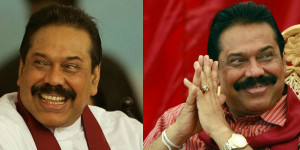 A number of MP’s who purchased the new iPhone X have been locked out of their phones after being unable to recall which of their two faces they used to lock the device when setting up the security feature.

One MP said, “When I was given the iPhone by my assistant I can’t remember whether I had just told the truth in order to protect my reputation, just told a lie in order to protect my reputation. Depending on which it was, the contours of my face differ as does the shape of my eyebrows. These affect the way the new iPhone’s face recognition functionality works and I currently unable to unlock my device.”

“I think when I got it I had just told the electorate that Yahapaanala is the only truly democratic regime in the world. But straight after I said that we are not willing to hold local Government elections despite agreeing to do so. As such I am not sure what face I was pulling the moment I setup the phone,” he added.

Meanwhile, it was revealed that Arjun Aloysius’ iPhone x launches when he points it to his arse.

2017-09-15
Share
Previous The Movie ‘IT’, About A Clown Trying To Scare People, Is Not Based On Mervyn Silva Says Stephen King
Next Maithri’s Daughter Admits Title Of Her Book ‘Janadhipathi Thaththa’ Refers To Two Different People