After Failing To Secure Colombo Venue, Pada Yatra To End At A More Suitable Location: Angoda 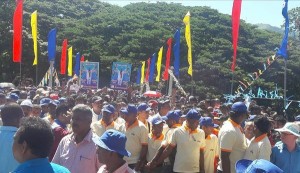 Having realised that they will not be able to return to power for another 5 years and that they did not and cannot secure votes to get into Government until such time, the Joint Opposition is attempting to protest and disrupt its way back into power and commenced their Pada Yatra procession this morning.

After initially failing to secure a ground in Colombo, the organisers of the procession said that they were not concerned and could not believe their luck when a more suitable location came up and a facility in Angoda said that they have space to hold the grand finale. Speaking to the press on the eve of the Pada Yatra, one of the organisers said, “We believed the Government had a hand in preventing us from securing a ground in Colombo but we are having the last laugh, having secured a space that best represents our cause in Angoda. In addition, we will be laughing with other people who are also laughing for no reason. We are thrilled to be among people who think, or don’t think like us.”

“The goal of Pada Yatra is to highlight the deficiencies of the Government by walking and causing mayhem and then blaming them. We can’t engage in suitable debate with them as we lack the requisite information and arguments to present our case, apart from saying that they have done nothing since coming into power. Of course in Mahinda’s first couple of years nothing got done either but that’s not relevant,” he added.