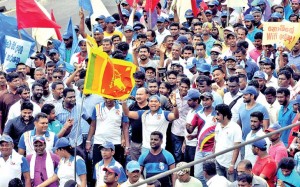 Following news that the highest number of condoms distributed at a single event will be at the Rio Olympics, manufacturers have stated that the second highest number will be handed out to MPs of the Joint Opposition and their supporters who attended the Paada Yatra in order to prevent the spread the questionable intelligence amongst the population.

The procession, which did not end with a bang much to the disappointment of those who opposed it, reached its finale in Colombo yesterday with a rally, the highlight of which several members of the Joint Opposition took to the stand to speak incoherently and very loudly. One attendee said, “I walked all the way from Kandy to Colombo to participate in this historic Paada Yatra. As well as losing my faith in the opposition along the way I have also lost all common sense and respect for those who oppose me and will resort to spouting expletives just because I can.”

“This Government has been in power for 18 months and achieved nothing. At least when we were in power there was a significant amount of corruption and nepotism. They can’t undertake those basic political tasks correctly. It is no wonder that the Joint Opposition want to come back into power. These programmes will be revived almost immediately,” he added.

In response to the large support of the Joint Opposition, condom manufacturers have agreed to help support the aim to help contain the nonsense and agreed to give free condoms to all those who participated and attended the procession.