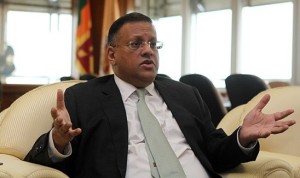 Former Governor of the Central Bank, Arjuna Mahendra has reapplied to his previous role after news emerged that the financial institution belonging to his son in law that he enriched, claimed that it was heading towards bankruptcy.

A spokesperson for the company said, “The future is looking a bit bleak for us but if we can get Arjuna Mahendran reappointed as CB governor we will be in the black soon. Just a couple of bond auctions and we can we can recapitalize the company with reserves equivalent to the national GDP of the country. What has the Mr. Coomaraswamy done since being appointed? Has even a single company profited from his bond auctions?”

Prime Minister Ranil Wickremasinghe said, “I got an Honorary Doctorate in ‘taking care of my friends’ so if the Australian Government was happy to honour my judgement why can’t the government of Sri Lanka see that my recommendation of Arjuna Mahendran as CB Governor is the best choice. If not for the country at least for Perpetual Treasuries.”

It has also been reported that the current Central Bank has curtailed the activities of Perpetual Treasuries to just providing change for Rs 1000 notes.