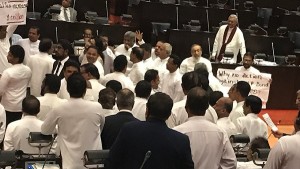 Dr Harsha De Silva said, “I can’t believe that the Joint Opposition have stooped to the same levels as us, albeit in different locations. They totally disrupted Parliamentary proceedings, just like we disrupted a Bond Auction. I saw Gamini Lokuge start the fracas this afternoon, but I didn’t see Arjun Mahendran initiate the Bond Scandal although everyone else did. I have selective blindness when it comes to highlighting misdemeanours of the UNP.”

Prime Minister Ranil Wickramasinghe said, “Before this Parliament discusses the most recent Bond Scandal, we demand a forensic examination of the Bond Auctions that happened under the Portuguese and the Dutch. We have to go in chronological order. Just because ours was the biggest and most recent. it doesn’t mean legal proceedings should begin now.”

2018-01-10
Share
Previous I Sought Clarification Of My Presidential Term By Supreme Court, As I Was ‘Asking For A Friend’: Maithri
Next Women To Find Answers To Their Problems At The Halfway Point Of A Bottle Says Govt After Removing Ban On Selling Alcohol To Females