I Sought Clarification Of My Presidential Term By Supreme Court, As I Was ‘Asking For A Friend’: Maithri 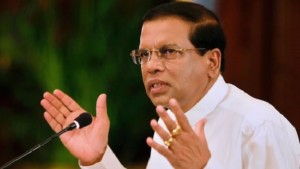 Maithripala Sirisena sought to play down his request for clarification of his term as President of Sri Lanka by the Supreme Court, saying that he while he was aware of the information, he was ‘asking for a friend’.

In a statement, the President said, “Some people are beginning to think that I want to be in power for several terms, just like my predecessor Mahinda Rakapakse attempted to do. However, the truth of it is that I only want to serve one really long term that spans several decades. So there is a stark difference between our two approaches. Also, I am still on course to abolish the Executive Presidency but only at the end of my two decades of power. One reason the current government have been slow in implementing our manifesto was due to the amount of traffic to get in and out of Parliament. Now that the flyover is complete, things should be quicker.”

“If you read my manifesto, I stated that loyalty should be rewarded and as such for every year I complete as President of Sri Lanka, I should be awarded another year at the end of my term. So far, I have accumulated a further six years and hope to notch up a few more,” he added.