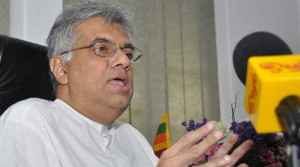 Prime Minister Ranil Wickremasinghe has told Ministers who are planning on importing expensive vehicles using tax payer’s money to wait a few more months as Tesla are about to announce a super luxury vehicle which provides even higher levels of comfort during their commute to see people who cannot afford cars due to the Government’s prohibitive tax policy on the purchase of cars.

Speaking at a press conference, the Mr. Wickremasighe said, “I have instructed the Treasury not to release funds to victims of the flood and the Kosgama blast whose houses need to be repaired but who will never receive enough money to purchase a car. But a number of our ministers are demanding luxury and as such it is best they be a bit patient as I was informed by Elon Musk that Tesla will be introducing a super luxury car in a few months which will better suit the demands of the ministers.”

“The new vehicle will be an 8 wheel drive, despite only having 4 wheels, so that Ministers like Rajitha Senaratne can visit areas of the country that other people access by walking on 2 feet and also will include license plate changing device in case ministers want to go on secret rendezvous or meet with an accident and avoid being charged,” he added.

2016-06-10
Share
Previous We Cannot Drive This Country Into The Ground Without Luxury Cars Say Cabinet Ministers
Next 145 Ministers Defeat Motion Against Ravi While 19,999,855 Sri Lankans Still Have No Faith