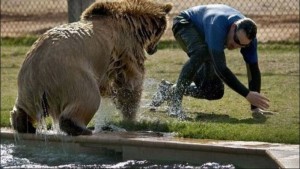 Having only recently watched Jurrasic Park, the Minister For Environment has decided to replicate the environment of the movie by allowing animals in Dehiwala Zoo to roam free, out of their cages, while visitors walk around the Zoo during the twilight hours.

The Minister said, “I believe things won’t be as bad as the movie because we don’t have any dinosaurs unless you count some MPs. So whats the worst that could happen when you send some kids out to pet a severely malnourished tiger? And we won’t have IT problems like Jurassic Park because we are going outsource everything to the communication shop across the road from the zoo. The sign on his poster says he does everything from sending faxes and photocopying to managing botanical garden IT systems. He’s also got a poster of Samuel L. Jackson on the wall.”

However, a spokesperson for the animals said, “We are very concerned about leaving our cages. We have heard about the increase in racial and religious tension in the country and the rise of hate speech which has, on occasion, boiled over in to physical violence. Adding another species into the mix is only likely to exacerbate things. So it may be safer for us to remain in the cages despite what Otara says.”

2016-11-25
Share
Previous Domestic Staff Member Has Statue Erected In Recognition Of Returning From Holiday On Said Date
Next Ranil Says Because Santa Is Not Real MPs Given Rs 100,000 To Buy Gifts For Constituents