Ranil Says Because Santa Is Not Real MPs Given Rs 100,000 To Buy Gifts For Constituents 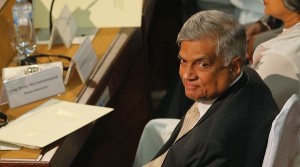 Prime Minister Ranil Wickremesinghe has exposed the hoax that is Santa to the nation and said that in order to manage the shock of the news each MP will be given Rs 100,000 to buy presents for their local constituents.

Speaking in Parliament, Mr Wickremesighe said “The voters are very unhappy with this Government. So when we people are unhappy, one think you can do to win them over is buy them presents. Some may call this a bribe, but I don’t because if I did then it will actually be a bribe. The MPs need money to buy these present so we have decided to increase their allowance to help facilitate this. With Christmas coming up, there are a lot of presents that need to be handed out, especially as Santa is not real.”

“If the MPs want to dress up in red, don a white beard and carry a sack to give presents that is up to them. Some MPs have said that they will initially buy presents for their families, which is not an issue as long as they voted for that MP and they wrote a letter to Santa,” he added.

“Unfortunately as a result of inflation, VAT, NBT and various other taxes only one person in my constituency will be receiving a gift of a cupcake this year.”

2016-11-29
Share
Previous Inspired By Jurrasic Park, Govt Invites People To Explore Dehiwala Zoo By Night While Animals Roam Free
Next Everyone Relived It’s The Final Month Of A Shit Year; Most People Set To Drink Through December