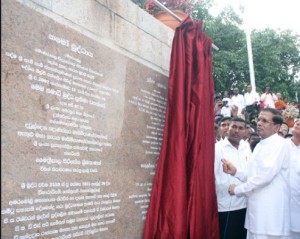 A domestic staff member employed in a house in Nawala will have a statue erected in her honour after returning from a recent holiday on the day she said she was going to return. The achievement is seen as a first in Sri Lanka and is likely to occur less often than the passing of Halley’s Comet in close proximity to the earth, which is circa every 75 years.

President Maithripala Sirisena said, “This is a fantastic achievement for a domestic member of staff. We all know how most of the people employed to assist with housekeeping go home for vacations or public holidays generally in accordance with their religion but always delay their return if they ever decide to come back at all. To have someone come back on time is something that is we need to commemorate. Forget climbing Everest, this is the key event of the year.”

The domestic in question said, “While I am very happy about the statue being unveiled in my honour, I only came back on the said date because I got confused and thought I had told them I was coming a week prior. If I knew I was going to return as per the date indicated I would have stayed back at least another 8 days. A lot of other fellow domestic workers are very upset about this and have said that they too will now be expected to return to their houses of employment on time.”

Meanwhile a number of domestics have been added to the newly created missing person’s register, having not returned from their vacation.