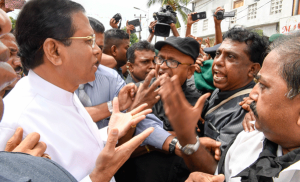 Unsure the if the new constitution will go down well with the public, MPs have been asked to dress up as themselves and go around the neighbourhoods in their respective constituencies asking people if the document will be considered a Trick or Treat.

One Minister said, “This year I was planning on going as Kevin Spacey, but my wife told me that I looked much more frightening in the national kit which I wear every day. I took a bag to collect sweets but most people told me to burn in hell, which I assume was their way of wishing me Happy Halloween. In addition to begging for chocolates, I was also asking their view on the proposed constitution as some people believed it was a trick disguised as a treat.”

One person who was dressed as Wimal Weerasansa said, “If the public wants to watch a horror show this evening, then all they have to do is tune into the news on any of the stations. I will be able to say things that will make you shriek and panic. When I get really angry for not being in power, even dogs are known to whimper.”

2017-10-31
Share
Previous Govt Allays Privacy Concerns Of Smart ID Cards By Assuring Public All Data Will Only Be Written Down And Left Out Open On Desks, And Not Stored On The Cloud For Hackers
Next Halloween Was More Fun For Me Under My Regime As The Public Were Genuinely Frightened: MR