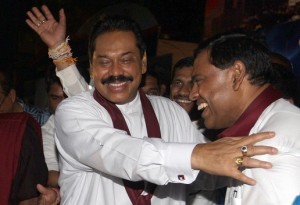 The former first family is expecting to hold a rare reunion this afternoon which has been organised on very short notice in order to ensure that all members are in attendance before one of them rejoins the corruption carousel,which usually results in one of them being in jail at any given point.

The reunion will celebrate the release of Basil Rajapakse for the umpteenth time with his favourite dish of black sheep expected to be served as part of the menu. A source close to the family said, “They are thrilled to have the whole family around the table, although they are holding the event in a secret location as they don’t know when the next person will be taken away so don’t want to give the police their whereabouts.”

“Some members are actually holding bets to see which of them will be the next in line to visit Welikada. The camp is split into those who think it will be a repeat offender, while others believe it will be someone new. Anyway, someone is going down for sure,” he added.

The one area of infrastructure that the Rajapakse name has not been lent to are prisons although the regularity of their visits has resulted in the consideration that, as a minimum, a Rajapakse wing will be required imminently to house the family members.