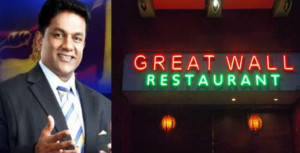 President of Sri Lankan Cricket and currently the most hated man in Sri Lanka Cricket was today branded a traitor for owning and operating Chinese restaurant but not doing anything to promote Sri Lankan cuisine in the country.

A family member said, “From a very young age all that boy ever ate was Sri Lankan food. He especially enjoyed a good coconut sambol for breakfast, an aubergine pickle with his lunch and almost every day wanted a kottu for dinner. He was a champion diner. We even remember how we once took him to a Chinese restaurant and they treated him really badly. Because he threw up after tasting a bad preparation of cuttlefish they called him a “chucker”’.

“After all the unpleasant incidents at Chinese restaurants, we now find out that he owns and operates one. He could have at least tried to run a Sri Lankan restaurant considering all we have done to feed him Lankan food. We are very disappointed by this and he is a traitor,” he added.

Mr. Sumathipala, responding to the claims said, “I have retired from eating Sri Lankan food a long time ago. Only once since then did an owner of a Sri Lankan restaurant want me to come and eat and I spent 10 days there gorging on the food. And for free mind you. I mean, who would be willing to do that.”

Top Chinese Chef Ken Hom said, “He has paid his dues to Sri Lankan cuisine and no one question his commitment to eating, but if he wants to eat Chinese food now he should be able to.”

Mahela Jayawardene said, “I was in the same restaurant a few months ago as Thilanga was. It was unpleasant, to say the least.”