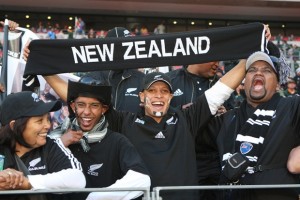 The All Blacks today urged their countrymen to support arch rivals Australia at the World Cup Final after being informed that Sri Lankan Fans say that they are more passionate NZ Rugby supporters than the Kiwis.

At a pre match press conference, skipper Richie McCaw said “We feel that there should be a balance of support at the final for both teams. Ever since we’ve become the most successful team in Rugby, most Sri Lankans started cheering for us. At previous matches, when we looked out from the ground in to the stands we thought most of our Kiwi supporters had got themselves tanned for the game, only to find out they were actually all Sri Lankans who were backing us. As there are quite a lot of them and they claim to be more passionate about us than the Kiwis, we’ve asked the people of our homeland to support Australia instead.”

Meanwhile the decision to appoint referee Nigel Owens to officiate the final has been referred to the TMO and is expected to be reversed with a scrum now likely to oversee the match.