Always The Attending Witnesses, Never The Bride And Groom Say Mahinda And Maithri 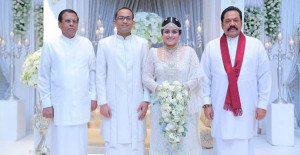 Despite their joint presence at numerous weddings in the capacity of attending witnesses, former President Mahinda Rajapakse and current President Maithripala Sirisena have said that a union between them is unlikely.

At a recent wedding, Mr. Rajapakse said, “We once were part of a team and I thought that I could get him closer to me, but he decided to jump ship and drown me. Ever since then, I am very wary of his motives. However, seeing as we are always bumping into each other at various MP’s relative’s nuptials, it seems like there could be something brewing and the universe is trying to send us a message.”

President Sirisena said, “I had to separate from him because he was holding me back. I wanted to achieve my full potential and prove that I could be an incompetent leader of this country, just like he was. Now that he has seen what I am incapable of, he wants to try and form a union. I know we have been signing marriage certificates together on a number of occasions, but it’s not in the place that sees us together. I am having a bit of trouble with my current beau so I have to think if I want to re ignite the flame with Mahinda and burn this country down to the ground.”

2017-12-08
Share
Previous Major Christmas Fundraiser Underway To Help Sri Lankan Santas Put On Some Weight
Next No Matter How Nice You’ve Been I Can’t Afford To Get You A Shangri La Maalu Paan: Santa To Kids