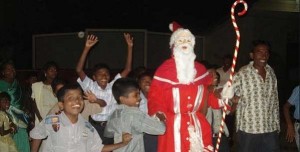 Members of the public have been asked to give generously towards a fund aimed at fattening up a number of local Santa Claus who will be stationed at every retail store over the next few weeks.

A leading medical professional said, “We are very concerned about these malnourished Father Christmas characters roaming the streets of Colombo. A number of kids are already apprehensive about Santa Claus so making him further frightful to look at won’t help and is likely to result in nightmares. The country has a significant population of pot-bellied uncles who they should recruit, rather than forcing these underfed men to wear pillow cases.”

One Santa said, “Basically they gave me some money and said put on a costume, dance, make children cry and don’t faint. They showed me a picture of Santa. I said I’m a skinny brown dude with no facial hair – even with a costume I won’t look anything like him. That’s when they showed me the half a bottle of Arrack for my troubles. I am easily bought – just like our politicians.”