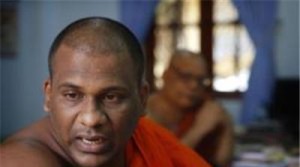 Extremist group Bodu Bala Sena today said that they would be taking a number of measures including going in to hiding, changing names and addresses of its members and in some cases even taking up a more Buddhist lifestyle after receiving a number of urine inducing threats from ISIS.

The group spokesman said “We have complained to the IGP and requested protection as we don’t know how to deal with receiving threats, although we are experts in issuing them. We are also considering legal action against ISIS as we were given protection under the previous government as the primary extremist group in the island, which is now being compromised.  Legal is the best way to deal with this because any other form of confrontation with ISIS would result in obliteration of the BBS leaving behind our whooped asses”

“In the meantime we are already taking action to protect ourselves going in to hiding in some of the most remote places of the island including Mattala Airport, the Hambanthota Conference Centre and Parliament until the election is over”

However ISIS have claimed that this is all a case of mistaken identity “We asked our Head of Communications to contact the BBC and issue a threat and he get confused and called the BBS. We knew we got the wrong number when a guy calling himself Gnanasara Thero started crying and said he would be calling an expert in dealing with threatening calls – Liam Neeson”