Car That Goes From 200 km/h to 0 In 3 Seconds Due To Pot Holes And Erratic Trishaws, In Colombo 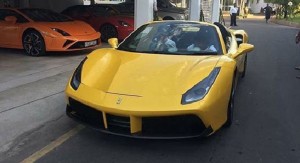 A top of the range sports car that goes from 200kmph to 0 faster than the other way has landed in Colombo according to customs officials who sell these stories to the newspapers.

One three wheel driver said, “The only thing going from 0 to 200 in 8 seconds is the number of people who call him a knob head for purchasing that to drive in Colombo. Because we three-wheelers have to keep cutting lanes and enter the roads without looking, there is no way anyone drives over 60km/h in this city. Apart from buses. The dials above 60km in the Ferrari are going to rust within months from not being used.”

One person says, “That is a colossal waste of money as it’s mainly going to be parked in his house or given the prime parking spot at hotels where it can be seen, rather than spending time on the road where the vehicle should be. It’s basically a billboard for someone who likes more than the white lines on the road.”