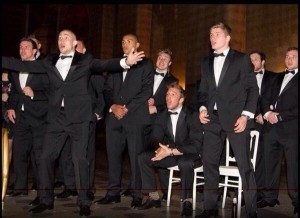 The England rugby union team were celebrating last evening having managed to secure 15 berths for final, located in the middle tier of the East Stand Row F seats 20 – 35, via Ticketmaster as a result of a prior scheduled appointment for that night having been abruptly and convincingly cancelled.

England skipper Chris Robshaw, speaking to the press said “It’s been a tough few weeks but we always knew we would make the final and watch the match from the stands. In the previous encounter we were close to not making ourselves available on the night of final but managed to snatch defeat from the jaws of victory. Last night however we made it abundantly clear how badly we wanted to watch the final instead of playing in it. I’ve always said we have the best fans and to be witnessing the final alongside some of them is a source of great pride.”

Match winner for the Wallabies, Bernard Foley, said “We helped England achieve their dream of experiencing a match from the stands as most of them only ever had played in games at Twickenham and a number of them complained about the view from the pitch. I tried twice last night to ensure this became a reality for them and in the end we pulled through. Congrats to them for getting tickets as well as I hear it’s a right pain to buy them online. Pocock and myself said we’ll wave to them from the pitch.”

Meanwhile the RFU are concerned about the backlash they will have to face after a number rugby fans complained that they would not be able to fully note down the lyrics to the only 2 verses of Swing Low, Sweet Chariot that England fans knew after the devastating news that the song would not be heard for the rest of the tournament.