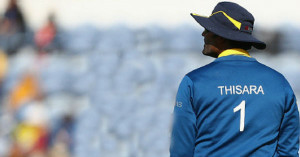 Residents of Dambulla have been warned not leave their houses due the toxic fumes emanating from the miniature effigy of Thisara Perera set alight during last evening’s protest which took place following Sri Lanka’s defeat to India in the first ODI.

One witness said, “We can’t believe that the fire is still raging on from this one small effigy. We know that Thisara carries a bit of weight but for things to get to the point where we had to call in the fire brigade shows how much he is carrying. We hope that it will be doused soon. Just like his career. We hope to prevent these kind of incidents in the future my sticking to burning an effigy of Romesh Kaluwitharana. Even at twice life size, that will burn out within 15 minutes.”

President of Sri Lanka Cricket, Thilanga Sumathipala, said, “When we said that, despite the whitewash of the test series, Sri Lanka would be on fire during the ODI matches. However, I thought that would be limited to the on-pitch performance not a post match protest. But one way or the other I have kept my word.”