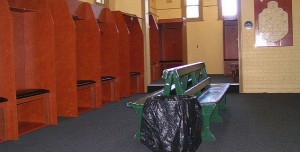 The Sri Lankan Cricket team notched up vital points in their bid to qualify for the next world cup after maintaining a spotless dressing room, making them the favorite to secure the ‘no biscuits in the dressing room’ wild card berth.

Speaking at the press match conference, captain Upul Tharanga said, “The middle order batting collapse was due to the fact that we needed all the players in the dressing room to do a quick clean up as a result of a spill. Dinesh Chandimal tried to break a Lemon Puff in half and most of the filling ended up on the floor. So I took on the task sacrificing my wicket and asked the others to also get out quickly so we could have the players start sweeping for the clean-up operation.”

A spokesperson for the ICC said, “We have been monitoring Sri Lanka’s progress and they are definitely in with a shot. Australia were the leading candidates to secure this wild card entry but unfortunately Glen Maxwell spilt half a box of Arnnott’s Tim Tam and didn’t clean up, blaming the whole episode on Steve Smith. The British were also doing quite well until the team decided to chuck a pack of digestives at Broad after a recent ODI.”

2017-08-21
Share
Previous Our Batting Takes The Biscuit So We Don’t Need Any In The Dressing Room: Asanka Gurusinghe
Next Firefighters Called In As Mini Effigy Of Thisara Set Alight Last Night Still Ablaze After 12 Hours