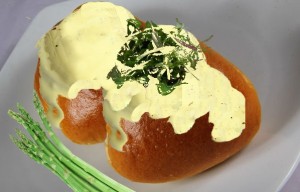 The Government has asked all canteens, restaurants, cafes and Kanda stalls to start serving Eggs Benedict, introduce Malu Paan Benedict immediately and change the title of their morning menu from Breakfast to Brunch as people are willing to pay more for what is essentially the same food, which in turn will help increase the country’s tax revenue.

A government spokesperson said, “We’re not sure when exactly this happened but over the last year we have seen a significant decrease in the breakfast sector. But the gap has been filled by the something called Brunch. On further investigation it was revealed that the latter is actually the former with a bit of chive and hollandaise sauce on top plus the surname Benedict added to it. But people are willing to pay significantly more so we can generate more tax revenues if we apply this across the country.”

A Kola Kanda stall owner said, “We also want to capitalise on this trend and I have introduced Kola Kenda Florentine, which is basically our spinach Kanda that I used to charge Rs 100 for but now command Rs 7000.  The bakery down the road used to charge Rs 150 for the Omelette Bun, but it has gone up to Rs 3000 after they renamed it Frittata Bun. In a week he made enough money to buy to buy a penthouse at Altair apartments in cash.”