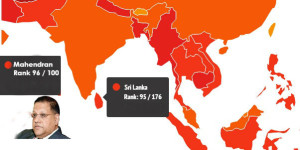 Sri Lanka Good Governance programme has seen its effort to eradicate corruption bear rotten fruit after the country was downgraded in the latest corruption index and falling just behind new entrant Arjuna Mahendra who has been so corrupt that he has been determined to be a separate corrupt nation.

The Prime Minister of Sri Lanka said, “We promised that we will improve things in this country and one of those things is corruption. This news it actually a positive – we have got better at corruption. We must make use of our strategic location as a hub in South Asia to increase dishonest and morally questionable behaviour.  That is exactly why I appointed my friend Arjuna Mahendra as Central Bank Governor.”

A security guard at the anti-corruption office said, “Sir, you can’t  park there sir. That is for our boss. He has not been here for last two months but we have to keep his car park space free. For the moment I am in charge of the anti-corruption unit. So far I have removed ‘anti’ bit of the sign because we are only doing corruption at this organisation and we are doing it well.”

Former President Mahinda said, “Despite not being in power we too have contributed to the increase in corruption as there was so much it could not be contained to just a few years, and there is spillover. If had been reported in one year we would have been top of the list”