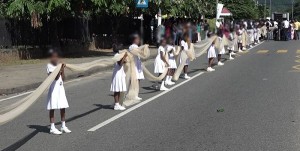 he Minister of Highways today confirmed that the expected long drawn-out tender process relating to the construction of the Central Expressway was truncated following the news that the longest Osari Pota could be used, thus saving the Government billions of rupees.

In a press conference, the Minister said, “The bride and the groom have gone to great lengths, literally, to get into the Guinness Book of Records. However, now that the wedding is over, rather than bin the bridal veil, we can use it for the Central Expressway. And considering that it comes with a group of children, we won’t have to pay a huge amount in wages. Just a pack of Tipi –Tipi, a banana and a milk packet will do.”

“The only downside is that unfortunately there will be no financial beneficiary by way of a bribe if we award it to the Osari Pota. But I will find a way to syphon most of the savings. I’ll probably tell the person supplying the kids lunch to add a ‘Minister’s Margin’ so I can buy an apartment,” he added.