In Response To Pics of Gunshot Wounds, Ravi Wades In To Seek Public Sympathy For His Paper Cut 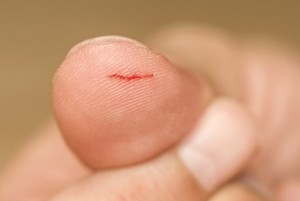 The recent battle for public sympathy between families of politicians took a further twist this afternoon after Finance Minister Ravi Karunanayake’s cousin posted a picture of a paper cut sustained by the MP while revising the VAT bill for the 106th time, in response to pictures of gunshot wounds sustained by a couple of other politicians which have been publicised on social media.

Mr Karunanayake’s cousin said, “Gunshot wounds aren’t the only injuries that politicians have sustained. My cousin was working on yet another revision of the VAT Bill, during which he sustained a painful paper cut. Although just 1cm, there was blood pouring out of the wound for over two minutes. We called an ambulance immediately and rushed him to hospital for brain surgery and we are glad to say that he partially made it. And finally so did the VAT bill. So it is a win-win situation.”

Mr. Karunanayake said, “Some of my detractors have said that this injury was self-inflicted which is only true to the extent that I should have got the VAT bill passed the first time, without having made a multiples meals of it. However, I was only turning the page of one of the documents and the next thing I know I heard a gunshot wound, which was from the TV show CSI playing in the background, and then lots of blood. I am grateful that I was attended some of the best medical professionals in this country and no one who belonged to the GMOA.”

Meanwhile,  Wimal Weerasanse has said that he intends on releasing pictures of his bruised ego to also try and garner public sympathy.