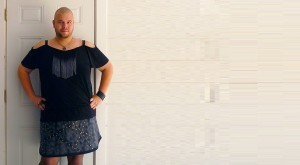 The administrative staff at St. Joseph’s College have congregated outside the school and are currently trying to decide whether to permit a father of one the students onto the premises after he came dressed in attire that they have prohibited mothers of schoolchildren from wearing.

A recent board placed outside the school banned visible shoulders and knees by mothers of schoolchildren entering the premises and coming to collect their children. This has caused a huge issue amongst the mothers who previously bided time while waiting for their kids by playing heads, shoulders knees and toes.

The father is question said, “I’ve never been able to find the right fit in men’s clothing. I’ve tried everything from slim fit to baggy but it always doesn’t quite look right. One day while my wife was at work I decided to try some of her clothes on I could not believe how great I looked in them. Like most Sri Lankan wives, she wears the pants in the family, very often literally as well. So I’m putting her unused clothes, especially the dresses, to good use.”

“I checked the sign outside my son’s school and it only says that women wearing clothes with exposed shoulders and knees cannot enter. There is nothing about men wearing them. However, they said that I need to wait outside until they make a decision. I think they are trying to change the board.”

A spokesperson for the college said, “All we are asking is that these children are not exposed to any part of the body that they see on the roads of the country, on tv and at home. They see it all the time so why do they need to see when they arrive or leave school ?”

2016-09-16
Share
Previous In Response To Pics of Gunshot Wounds, Ravi Wades In To Seek Public Sympathy For His Paper Cut
Next Rambukwella Adds ‘Land’ To List Of Places He Can’t Handle His Drinking, Following ‘Sky’