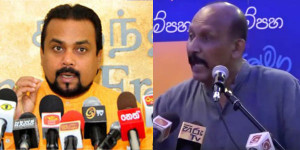 The rising cost of owning a white van for the purposes of intimidating the public has taken a toll among former Govt cronies, who have resorted to making public threats of death over the last few weeks.

In a desperate to save his failing career, MP Wimal Weerawanse said, “We have lost the means to secure bribes and I don’t have access to the white vans in my department which I used for personal chores including abducting people or dropping in for a thinly veiled chat with people who I did not like. However, this government has failed to curb inflation and imposed more import duty on vehicles which has made it prohibitive for us to purchase them. As a result of this, I have to make threats to bomb the parliament in public.”

Former General Kamal Gunaratne said, “I was part of the effort that defeated terrorism in the country, sometimes by questionable means. But terrorism has resurfaced in the form of a new constitution that doesn’t make a single reference to the Rajapakse family, so it unfit for purpose. The new constitution also prohibits corruption which makes it treasonous. So anyone drafting is a traitor and they should be dealt with.”

2017-10-25
Share
Previous ‘ODI Series Against Pakistan Was A Personal Celebration Of Oktoberfest And Halloween For Me’: Thisara
Next Media Should Stop Spreading Fake News And Spread Our Fake Promises Instead: Maithiri and Ranil