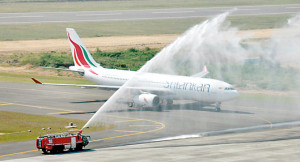 The Aviation Department today announced that it will divert Mattala Airport to Bandaranayake International Airport as an emergency measure in order to prevent an impending disaster.

Mattala Airport, which took off in turbulent circumstances after the huge financial and environmental cost was revealed, was seemingly cruising at an altitude of mildly uncomfortable media articles, having been powered by high energy Rajapakse regime. But a mid-air power failure seemingly caused the airport to falter with several flights evacuating the airport. The pilot of plane and his second in command, also his brother, managed to avoid being directly implicated in the failure to fly the airport to its scheduled destination of Infrastructure Success.

Flight investigators said they listened to recordings from the Black Box to find out exactly what happened but that a lot of it had been censored out.