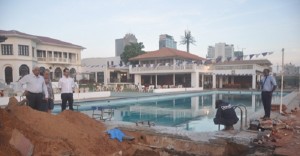 The public has been warned that there has been a significant increase in the amount of crocodile tears shed over the last few days which could potentially lead to a flood in certain areas outside Colombo 7.

A spokesperson for the Meteorological Department said, “The previous occasion we had to issue a flood alert due to crocodile tears was when Yoshitha Rajapakse was jailed. The issue this time is that it is not just the crocodile weeping but, in addition, the tears of laughter that are adding to the increasing water levels in the city. This has been compounded by the displaced water from the now demolished swimming pool. We ask that that public please refrain from schadenfreude.”

The President of the Colombo Swimming Club said, “If the people that were previously living in Slave Island formed a club and say they called it the ‘Colombo Slave-Island Club’, which deterred single people from joining and had swimming pool, then we too would have felt sympathy for them when their land was taken away from them. But in our case, we have organised our club in this manner people should feel sorry for us as we now have to seek alternative arrangements to avoid rubbing shoulders with the hoi polloi.”