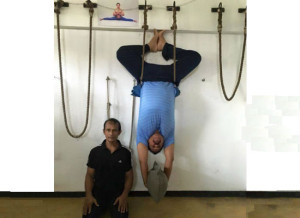 The newly-appointed hangman is under threat of losing his job after it was revealed that his first procedure had completely malfunctioned, leaving the prisoner in a hanging in an unusual position from the stated one in the operating manual, as a picture leaked to us this morning has revealed.

The hangman, Mr. M.A. Ramu, has been summoned this afternoon to the HR department for a review interview and, together with the management team will be deciding his fate, which could include him hanging by the very same apparatus he was hired to operate.

Speaking to us, the hangman said, “I have played the game so many times and was the national champion, but once they hired me they said the job involved no guessing and getting it right in one go. They put a Mr. Rajapakse in front of me and said ‘get to work.’ I tried to follow the instructions in the manual, but it was in Chinese. I tried Google Translate, but I knew something was wrong when at one point it said ‘Fried Rice should be inserted into the machine every 3 days for to work properly.’ I thought I had done it properly which is why I sat next to him after I completed the procedure and asked the photographer to take a picture.”

The prisoner, who was immediately released said, “This is the problem with Yahapaalanaya. They have hired incompetent people who can’t do their jobs properly. Luckily I managed to speak to my contacts and in China and tell them to send malfunctioning equipment. Managed to get a commission also. And hanging in that position meant all the blood went to my brain. And a lot of it cause it wasn’t that full earlier.”