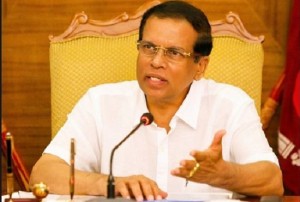 President Maithripala Sirisena has advised Donald Trump that he should have closed a runway at leading airports as a means of controlling immigration instead of banning people from select countries after proving it works in Sri Lanka.

“People who want to visit the island dropped by 50% after hearing about the chaos at immigration following a decision to close the runway for repairs. Sure we’re gonna lose a whole lot of money but it means that tourists also don’t come here and try to spend their money at places that don’t accept locals,” said Mr Sirisena.

He also signed an Executive Order and added, “If America thinks they are the only country who can ban people from entering the country they are mistaken. We have identified seven countries from which no tourists arrive and we have taken active steps to prevent these people from arriving. So far our success rate is 100% and we expect it to grow to 180% within the next three months. We are thinking of adding several South American countries to the list as well cause they don’t want to holiday here either.”

2017-01-31
Share
Previous Trump Says That Large Crowd At Mahinda’s Rally Is An Alternative Fact As Attendance Surpasses Inauguration
Next ‘Now That We Have Independence Do We Need To Keep Practising For It?': Everyone Stuck In Traffic