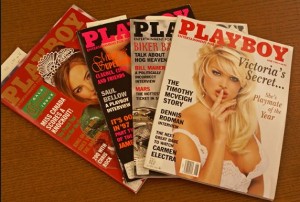 Internet users in Sri Lanka have been put in a sticky situation following the significant increase in the price of internet data, forcing a number of people to dig out their father’s old Playboy and Hustler magazines in order to read quality journalism.

One person who frequently uses Incognito Mode on Google Chrome said, “This government are screwing us with their taxes on data and I can’t watch any screwing around, because I am into DIY repairs in my spare time. There was this one instructional video where the plumber came to see a young lady about her waterworks which I was beginning to enjoy. But I only managed to see the up to the part where he got his tools out and then I ran out of data.”

“I’ve had to resort to dusting off my father’s old Playboy magazines now to try and get the information I need. A friend of mine said that you can find lots of house fittings in those magazines like knockers and kitchenware items too, like jugs,” he added, while trying to rip apart some pages.

High Hefner said, “I was planning on moving my business to go all digital but then was told that about the renewed interest in the publication in Sri Lanka. Which is good because people in other countries are writing to me asking to pay for keyboard repairs. With magazines you don’t have that issue.”