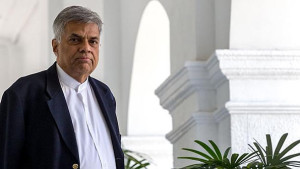 In news that has left Colombo’s social and political circles reeling The Prime Minister today apologised for comments he made earlier this week about having a Mandate, after pictures of him and another dude appeared on the Interweb.

‘When I said I was going to “exercise my right as I have a man-date”, the journalist took this to mean one word, but she didn’t hear the hyphenated space and I forgot to clarify it. I was actually explaining how I was going to spend my Saturday evening working on my right bicep and then meeting a “friend” for drinks’

‘I apologise to my wife and anyone else whom I may have hurt when I suggested that I had a clear Man-date last Saturday as I was supposed to be spending the evening with her watching Game of Thrones, but I went to meet a friend on the pretense of going out to buy some devilled sausages’

Despite the significant number of Royalists in Parliament, it is suspected that Thomians have a higher number of Mandates.

2015-06-10
Share
Previous Namal Makes Hospital Pass to Himself after CID Summons
Next Honda Recalls Vezels: Too Many on Colombo Roads