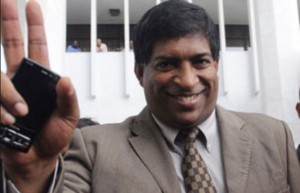 Winner of the Banker Magazine’s Banker Of The Year (South Asia), Ravi Karunanayake was today given another major accolade after being named as Dialog’s Lord Of The Reload following the revelation that he had his former landlord Arjun Aloysius on speed dial.

It wasn’t just the former Finance Minister who was in the winnings, as Arjun Aloysius was also awarded several top prizes in Mobitel’s Cash Bonanza as a result of the over 500 calls he made to the Karunanayakes.

A spokesperson for Dialog said, “This is the highest number of entries we had to the Lord Of The Reload Competition so we have decided to ditch Sunil Perera as the brand ambassador and appoint Ravi Karunanyake. He has now won enough credit to share with his soon to be fellow inmates. However, this does not mean he is immune from our policy to spam people with SMS messages.”

A spokesperson for Mobitel said, “Since he is no longer captain also, we have terminated the contract with Angelo Mathews and have signed an agreement with Arjun Aloysius to promote our Cash Bonanza promotion. He has already won the top 10 prizes this season and we heard he will distribute them to certain politicians. But this does not mean we provide good 4g coverage.”

2017-11-17
Share
Previous He Was A Friend With A Different Kind Of Benefits: Ravi’s Wife On Her 320 Calls With Arjun Aloysius
Next MPs Can Insult, Slander And Promote Hatred In Public And Parliament Confirms TRC, Because It’s Not Social Media