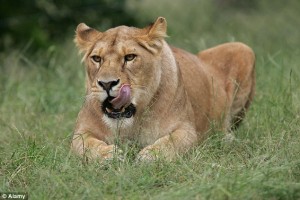 A campaign devised to promote racial superiority and division, organised by a group of people dubbed ‘racist idiots’, hit a snag last evening when the fuel source for the campaign, blood provided by Lions which do not even exist in Sri Lanka, began to dry up after the leader of Pride instructed all its members to cease participating in any blood donation campaigns.

Speaking at a press conference which turned out to be a roaring success, a spokesman for the lions said, “A small group of moronic Singhalese people mistakenly believe that they have inherited the blood of a lion. This is because one of our forefathers from India got a bit too tipsy at the Blue Elephant one night and decided to make out with a Princess outside the club. But after checking CCTV footage we can reveal that the encounter was limited to a bit of lip tickling, copping a feel and some spooning. There was no further intimacy that could have spawned anyone, especially decedents that aim to incite racial tension. We lions are not racist – we are non-discriminate scavengers and will eat anyone. And the lack of opposable thumbs prevents us from spraying racist graffiti on gates.”

“We have invited a group of those who claimed to have ‘Singha-Le’ to spend some time with us in our habitat for a few days to see if we do belong to the same family tree and are a common species, in which case there is nothing to fear. Of course, if they don’t actually have Lion’s blood, then I guess its just desserts.” he added, smacking his lips.

The President Of Sri Lanka is expected to intervene and comment on this matter as soon as one of the Lionesses decides to throw their bra at Enrique, which is due any moment now.