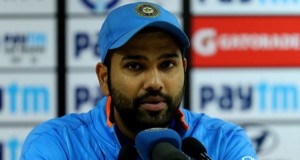 The Sri Lankan cricket fan who was generously donated a return air ticket by Indian skipper Rohit Sharma has asked if the name on the ticket can be changed to Thisara Perera so that the Sri Lankan skipper can return home early and help the ailing national side.

The fan said, “My family medical issue is not as pressing the team’s requirement to send home Thisara Perera. Since Mr Sharma paid for the ticket I am willing to even pay for the name change and it is the least I can do. I don’t mind taking the next flight. My father, who is quite ill, also agreed that he would rather Thisara come home first.”

However, Rohit Sharma said, “While I am sympathetic to the appeal, I feel that Thisara going home is not in the best interest of one of the teams that are playing this series. I have to consider this request and look at his weaknesses before making a decision. It might take another double century for me to make this call.”

2017-12-13
Share
Previous No Matter How Nice You’ve Been I Can’t Afford To Get You A Shangri La Maalu Paan: Santa To Kids
Next Dressing Our Male Candidates In A Wig And Ticking The Female Box Was Our Cunning Plan To Meet The LG Quota: SLPP