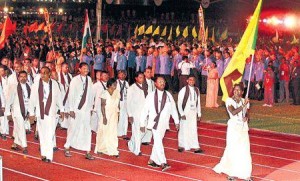 Several Sri Lankan medal winners and record breakers participating in the South Asian Games have been advised by their media manager that they should visit jail bird Yoshitha Rajapakse in prison on their return as that is they only way they are likely to get any decent media coverage, despite their achievements.

The athletes, who have a number of displayed a number of attributes that Sri Lankan politicians lack including hard work, going about their business without the need to talk about it and not telling porkies have been making several podium appearances taking Sri Lanka to second place in the medals table out of eight countries.

One media organisation said, “Everyone knows that negativity and politics sell news, especially in Sri Lanka. They generate more page views and debate in the online section so we focus on those stories. Some people say that we can help uplift the mood of the country and also give exposure to these athletes who have done the utmost to represent Sri Lanka by covering their achievements. But unless they decide to visit someone more popular like Yoshitha, an athlete who has tackled a few issues, then it’s not worth giving space to this.”

“We prefer to feature stories with just one paragraph in them sometimes. Like when the UH Human Rights chief visited Ranil and then Maithri, we managed to separate it into two stories each with just one sentence when we could have easily combined them.” said the editor of the Daily Mirror.