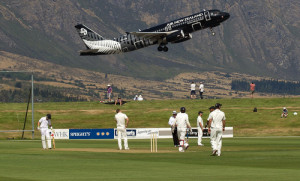 In one of the most creative inter-government collaborations, the Sri Lanka Cricket Team and Air Force today announced that they are intending to purchase several fighter jets in order to try and beat Pakistan in the two remaining test matches.

In an emergency meeting held last morning, ministers of the respective organisations outlined their immediate requirements with the Air Force stating that their pilots were immensely bored since the end of the war and the Cricket Board outlining that they just did not have the fire power to bat out a full day despite having batsman who can admittedly bat.

In a show of graciousness, Pakistan will be part of the consortium who will provide the required jets, although some critics sense that this could mean substandard planes that may backfire requiring Mahela to come out of retirement.

Sanath Jayasuriya has still not formally retired from cricket