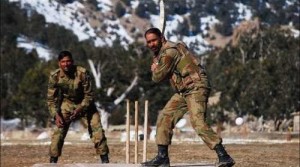 Sri Lanka Cricket’s interim committee has been forced to perform a fresh inspection on the team’s security arrangements in the wake of a second attack on Angelo Mathew’s men in Galle last weekend.

The attack, which claimed seven Lankan scalps, was led by notorious ring leader Yasir Shah, identified being the head of the Mona Labbaqdah organisation.

The assailants, poorly disguised as the Pakistan national cricket team, evaded security for three whole days before mounting their ambush against the Sri Lanka team on the final day. A reputed journalist was quoted as saying “There is no way this is the Pakistan team. They played with purpose and discipline, and to win. They must be impostors”. Sangakkara, the first victim of the ambush, told reporters “It was all too familiar. All I could do was watch”.

In a press conference, skipper Angelo Mathews said “They lulled us into thinking they were down and out cricketers. They played quite shit for two days and we let our guard down. Then they took out seven of our players, and we didn’t have a chance. I will be speaking to the administration about this gross breach of security”

It is rumoured that SLC will deploy the tried and tested Forward Defence as a counter terrorism strategy, after the failure of the experimental system, codenamed Hopeful Waft.